Some Things Never Change 2012
Children of the First World War, the so-called ‘war to end war’ commemorate the plight of children worldwide.
Thousands of kisses on a concrete pillar will never be received.
Cut to 2012. A mother sobs. This is not her war.
Killed by mortar fire, her children were 12,10 and 5 years old. 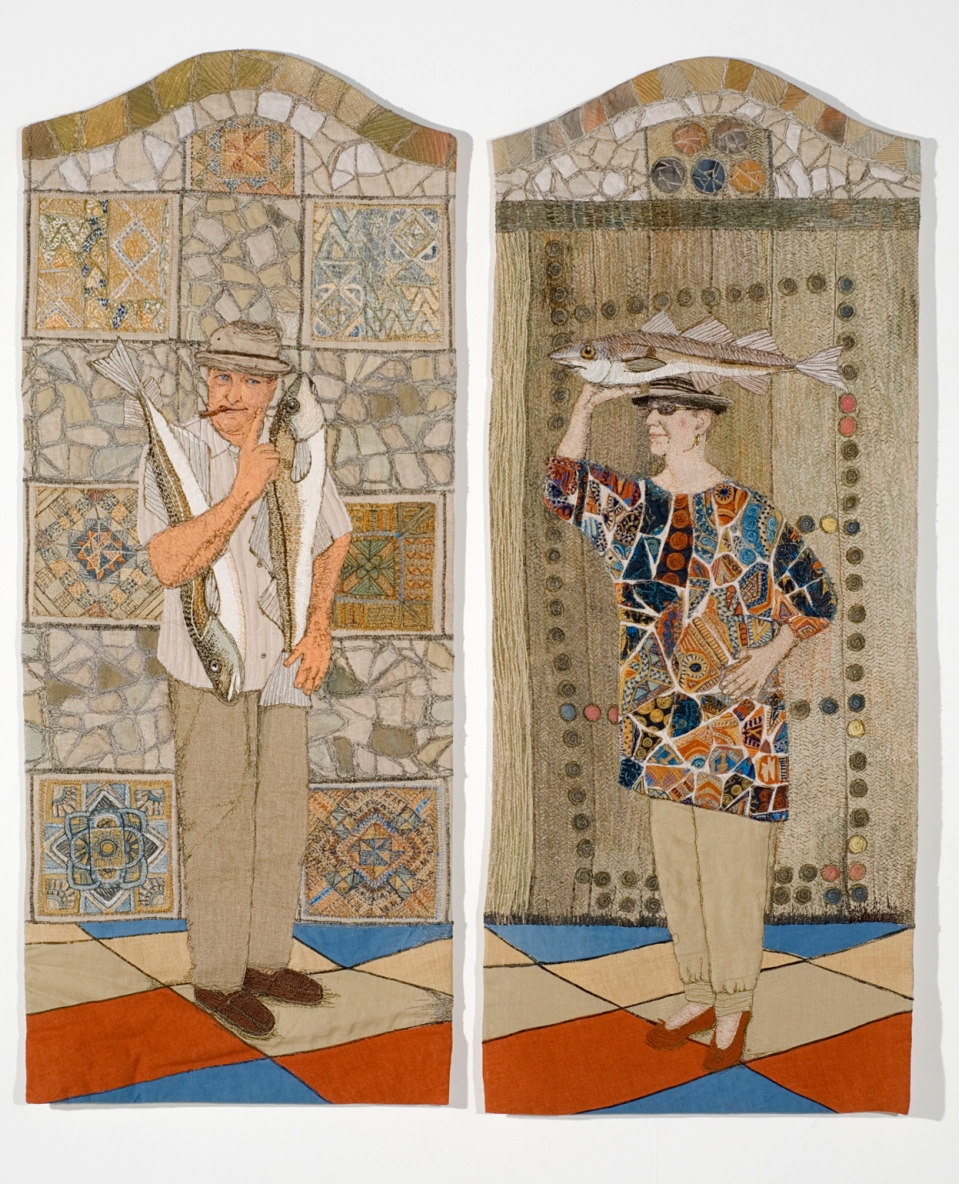 From Grimsby to Gracia • right and David as Dali  • left were inspired by a recent visit to Barcelona, they reference cardboard cutouts of Dali seen outside the Dali Museum , the Gaudi mosaics and tiles in Parc Guell , a colourful tiled floor from a neighbourhood bar and fish from the artist’s hometown of Grimsby.

Referencing several items from the Manchester Museum’s costume Collection, including a button shaped like a fish, and a dress and jacket from 1962, the year the 62 group was formed this is a portrait of my sister, Jean, first aged 17, then aged 67.
The clock on the wall shows 2.05 am whilst the wrist watch is set at a later time to indicate the passing of time.
The side panels are made up from labels showing more items from the Collection .
They also reference personal, national and global events from the past 50 years . 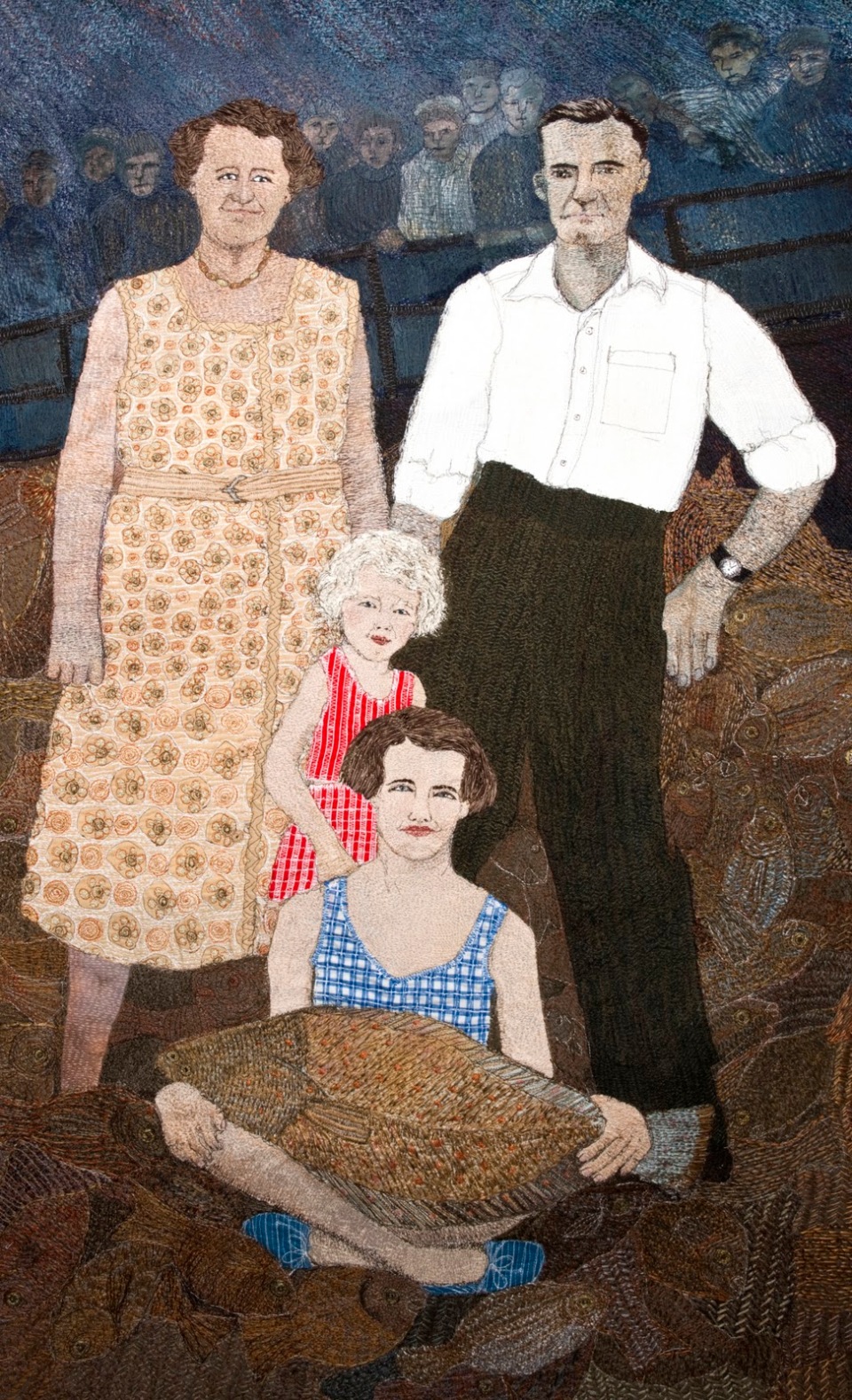 An analogy between two different eras and two different environments, which nonetheless share a name and a sense of loss. Three friends, one carrying a fish, explore one lost environment, Grimsby Street, London, E2 whilst hailing from another. 1930s Grimsby (Lincolnshire) girls meet London 2012.

Girl with a patterned Dress 2012 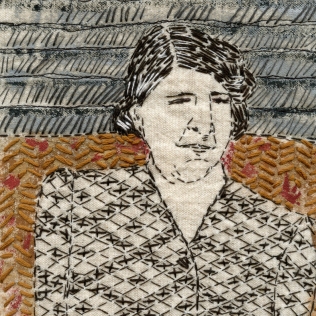 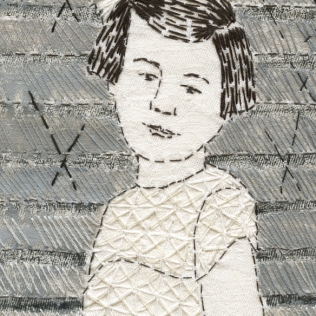 Girl’s Day Out for Hilda, Nellie and Ida

Girl’s Day Out in the East End for Hilda, Nellie and Ida 2012
mixed media • hand and machine stitch with acrylic paint
size 128 x 102 cms
Exploring displacement using old family photographs, images of distant relatives I never knew, cut into to a modern day environs, Girls Day Out enquires into and questions, the sense of belonging/not belonging whilst referencing the passing of time and the transience of life itself. 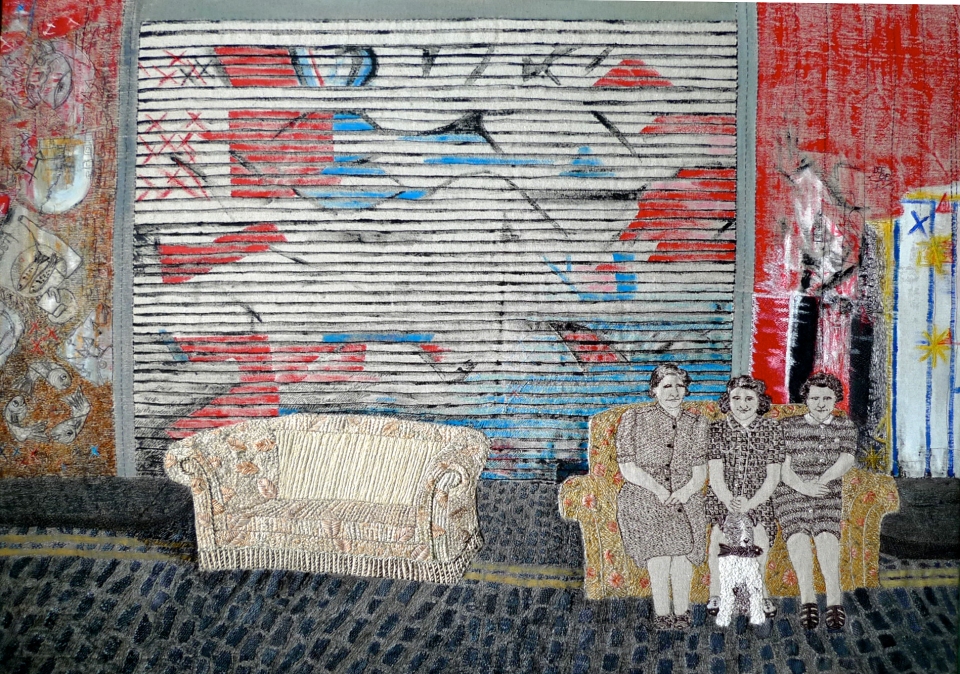 East End Girls • aka Alice, Madge and Muriel 2012
mixed media • hand and machine stitch with acrylic paint
size 128 x 102 cms
Combining the then and now, evoking a sense of the journey in between produces an ‘at first glance’, homely domestic situation, three women with their dog. On closer inspection abandoned sofas, graffiti, the dilapidation in the slightly surreal composition create an allusion to the circumstance of the women portrayed.