Woman with a Fish Solo Exhibition 2009
This exhibition was an observation of the Grimsby fishing Industry from a personal perspective. Many of the pieces in this exhibition tell a story, of experiences and memories from my childhood, of the ‘then’ and ‘now’ and sometimes the journey in between.

Woman with a Fish ’09 ( featured image above)  is the second version I have done of Woman with a Fish . The first which is much smaller was on tour in Europe from March ’08 to November ‘09 with the Embroiderers’ Guild ‘ Art of the Stitch’ International Biennial Exhibition .The original idea came from an illustration done by my husband David Pitcher in the 1970s when he was a student at St Martins School of Art in London. I felt it was such a great idea and as the original illustration had been lost, I felt it was both a name and an image worth reviving. My pieces ‘ Closed’ and ‘ East End Chair’’ are actually closer in composition to the original but this one shares its name. This piece portrays my maternal grandmother Annie Jane Smith standing outside her terraced house in Columbia Road, Grimsby. She is cradling a fish in her arms. The fish symbolises the great importance of the fishing industry to the town and what it meant to be part of it . Grimsby was at one time the largest fishing port in world, the‘ Klondyke of the East Coast’, alas no more.

Woman with a Fish 2009 – photo by Steve Thornton

A Parcel of Fish 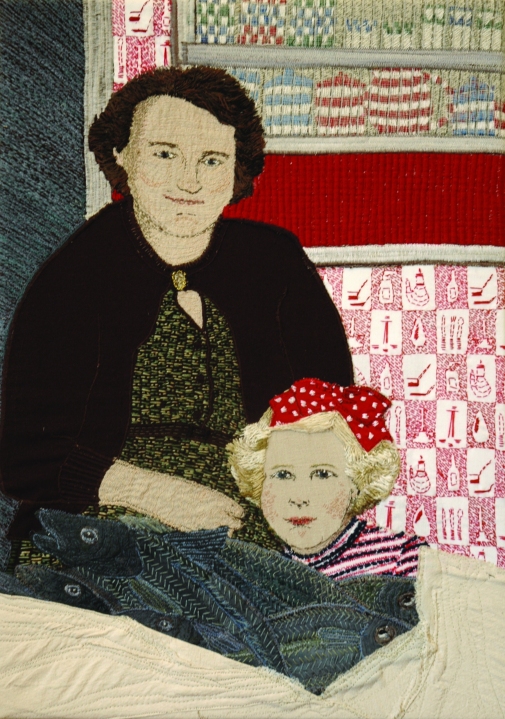 A Parcel of Fish

A Mug of Ship’s Tea • below

In the 1950s Grimsby’s fish docks were very familiar for me as my father Fred Stone worked there as a fish merchant and as a young child I remember being taken on board a trawler by him and meeting the crew who showed us around the ship. It made a huge impact on me as I was fascinated to see how the men managed to live and work in such a confined space for their long and dangerous trips at sea and it is one of my earliest memories of the fish docks. I have a vivid memory of being given a drink of milky tea in an enormous enamel mug and when I went to school the following Monday we were asked to write a story about what we did at the weekend . My story went like this. ‘ At the weekend I went on a trawler with my Dad and I had a mug of ‘ship’s tea’. That memory is captured in this piece of work which shows me with the mug of tea and my father, Fred standing by a trawler with the crew looking on in the background.

The touring textile exhibition ‘Life on the Coast’ was designed to preserve a record of the artist’s childhood whilst capturing a glimpse of social history, and celebrating the lives of some of the people involved in the fishing industry.
The project which was supported by the National Lottery, through Arts Council England began at the Campden Gallery in Nov/Dec 2009 and continued during April 1st to May 31st 2010 at concurrent exhibitions at the Fishing Heritage Centre and Gate Gallery, Grimsby 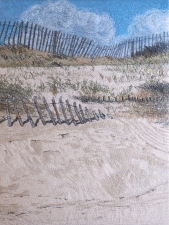 All the work in this exhibition had some connection to my life and environment . Combining hand and machine stitch my work is often figurative, usually narrative and sometimes has a surreal sense of humour. I use thread and stitch as a means of mark making and all its facets; line/colour/texture/tone,the stitches multiplying until the image is complete. My family have close connections with the fishing industry as my husband’s grandfather was a skipper and my own father was a fish merchant so I spent many hours ‘down dock‘ as a child and I have always loved the much underrated Lincolnshire coast where my family holidays were spent. The exhibition was divided into two parts.

At Play
In the 1950s many families from Grimsby holidayed along the Lincolnshire coast from Humberston Fitties down to Skegness . It was commonplace for the father to carry on working whilst the womenfolk and children were on holiday. In my family my Dad used to take us to Chapel St Leonards on a Saturday, go back to Grimsby to run his business all week and then collect us again the following Saturday. In my husband’s family his Dad ferried them to the Humberston Fitties one at a time on his scooter and then commuted every day to Titans to work as a sign writer.

The Humber Forts are two large fortifications in the mouth of the Humber estuary. They were built in 1914 to protect the entrance to the estuary. They stand 18 metres above the water and have a diameter of 25 metres. There was accommodation for 200 soldiers. They took three years to build and construction finished at almost the same time as the First World War. During the second World War they remained as a deterrent and were regularly attacked by enemy aircraft. During this time a netting was put up to prevent enemy submarines traveling up the estuary to Grimsby or Hull.
Haile Sand Fort is around the low water mark between Humberston and Cleethorpes on the coast of Lincolnshire

At Work
In the 1950s, Grimsby was the largest and busiest fishing port in the world and was known as ‘ The Klondyke of the East Coast’. As a result of the Cod Wars with Iceland this industry has been in decline for many years. The port is still home to the largest fish market in the UK although most of what is sold is now brought overland from other ports or even overseas in containers.
The Braiding Room hanging (below) portrays several women braiding nets . Amongst those depicted here are Maureen Brown ( in the fore ground) , Ivy Venney, Marie Alcock, Edy French, and Beattie Kinnaird. In memory of Maureen Brown on whose original photograph this hanging is based. 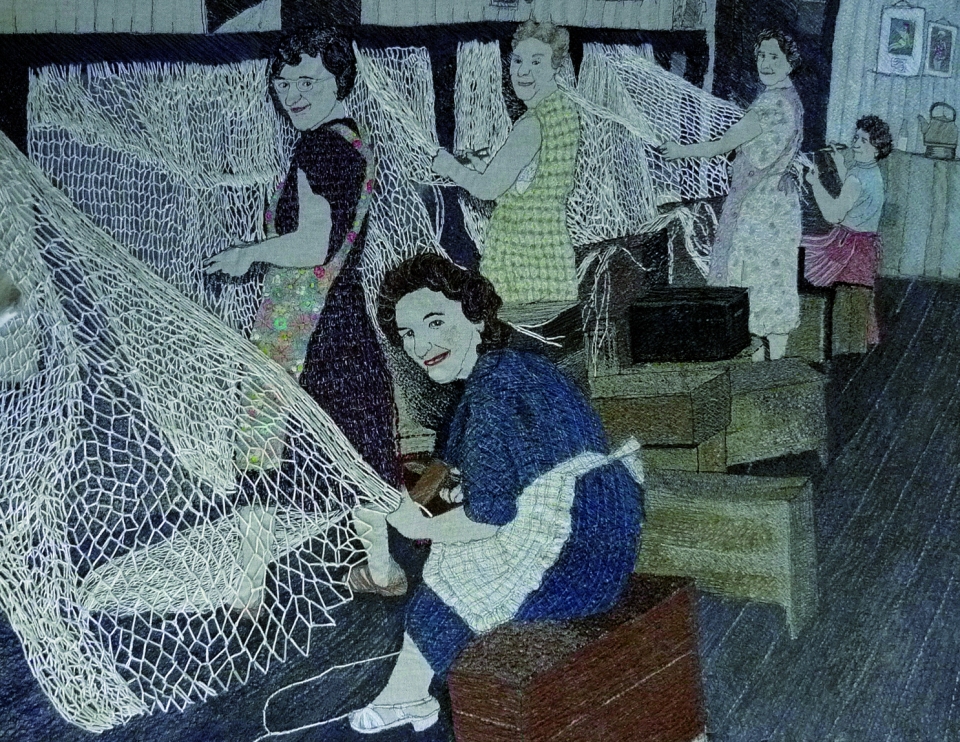