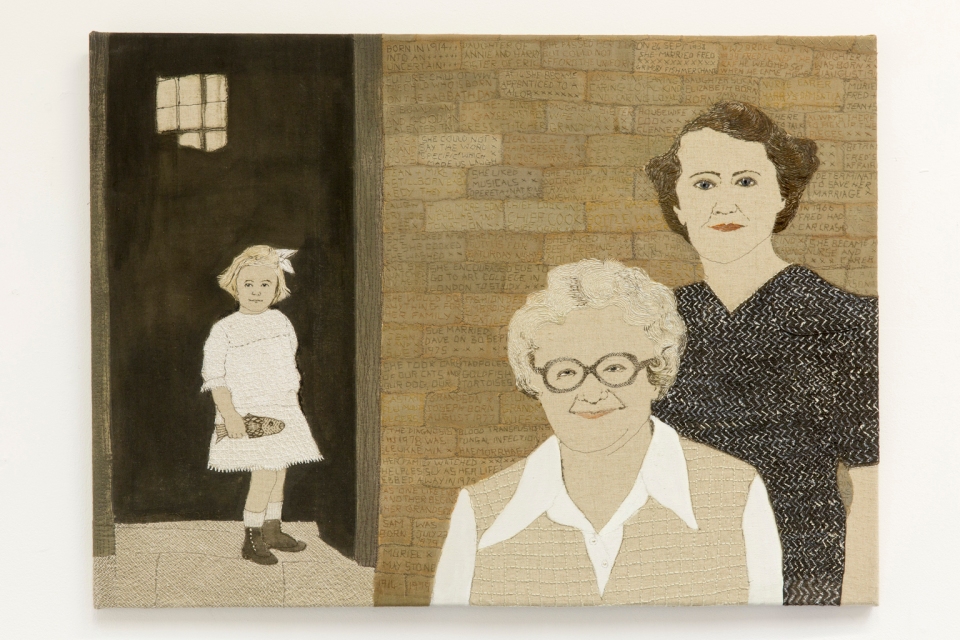 Portrait of a Grimsby Girl

The opening of the 62 Group Ebb & Flow exhibition is getting closer but the project itself has been almost two years in the planning.

It started with an invitation from Grimsby Minster to show our work in the Minster which is a busy and vibrant resource for the people of North East Lincolnshire, an “architectural gem” tracing its history on this site for more than 900 years. I soon realised, however, that because we are such a large group of very diverse artists that there would not be enough suitable hanging space and display for smaller 3D work in the Minster for all of our work to be shown.

Lucy Brown
All at Sea

The Ross Tiger, GY398, is an ex-working 1950’s trawler and the largest item in the heritage collections. Lucy Brown, one of our exhibiting members has made site specific work to be shown on board the Tiger. The image left shows Lucy’s ‘sea bags’ which will be installed around the living quarters on the Tiger. Once the venues were in place we worked on the detail of the project and funding bid to Arts Council England by Grimsby Minster which was successful. This enabled us to work with freelance writer and curator, June Hill who has been on hand to advise the group throughout the project and who will be opening the exhibition on 13th September. It also helped the group to put together a full education programme and to produce a full colour catalogue with professional photography which will be on sale at both venues.

Details of our education programme can be found here. Many of our members visited Grimsby in February when we were given a tour of both venues and of the museum collections store. All of our exhibitions are selected by a selection panel of 5. The panel is different for each exhibition and can include a representative from the venue. The selection process has now been completed and 37 pieces of work were selected for the exhibition made by 28 artists.

Photography Day at the Minster

This week we also completed the photography for the catalogue which is now in the design stages. The catalogue will be on sale at both venues.

The photographer for the majority of the pieces is David Ramkalawon who came to Grimsby from London for 2 days to photograph work at both venues.

Next week the hanging process begins. Watch this space for more ‘behind the scenes’ glimpses of Ebb & Flow.

On Friday I managed to see the wonderful Cloth & Memory 2 exhibition at Salt’s Mill in Saltaire. The exhibition has now closed but I would urge anyone who couldn’t get there to buy the fantastic catalogue that accompanied the show. It available from the CLOTH & MEMORY website and is a really interesting read.

In December 2013 The 62 Group of Textile Artists will be having an exciting exhibition at the Koyo Gallery in Tokyo, Japan. I am delighted to say that ‘ A Grimsby Girl’s World Tour • Stopover Tokyo’ (Detail shown below) and ‘A Tea Party in Tokyo’ have been selected for this exhibition and will very soon be on their way sailing to Japan. My girls (and boys) seem to travel far and wide nowadays. Shame I can’t always go with them!
Take a look at the 62 Group of Textile Artists’ new Facebook page and keep up to date with all of the group’s latest news and activities.

This wonderful exhibition at Salts Mill in Yorkshire features some members of the 62 Group and is well worth a visit if you are in the area.
CLOTH & MEMORY (2) is a site-specific exhibition located in the UNESCO World Heritage Site: Salts Mill, Saltaire Yorkshire UK. The exhibition features 23 artists drawn from a UK and international cohort and runs from August 18th to November 3rd 2013.

There is an accompanying catalogue which I am definitely going to buy.

What a stimulating day it was yesterday. First my copy of the new 62 Group book RADICALTHREAD dropped through the letterbox, closely followed by my copy of SELVEDGE magazine. Nether disappointed me.
Audrey Walker MBE, Alice Kettle, Jan Beaney and Jean Littlejohn, and Tilleke Schwarz are all in the RADICALTHREAD book which profiles 57 current members of the 62 group, including myself and gives an insight into the innovation and the creativity of the group which celebrates its 50th anniversary this year.My piece Family with Fish is featured on page 112.

Preview the book
Order a copy of the book
I spent last night reading it and I can tell you it is a great read. Let me know YOUR thoughts on the book.
SELVEDGE magazine is an equally good read this month. My favourite article is written by June Hill and is called Strong Influence. It outlines the influence a good teacher has on their student. It was of particular interest to me as I was lucky enough to have been taught at Goldsmiths by Constance Howard, Christine Risley and Eirian Short who are featured in the article alongside Audrey Walker and Alice Kettle who are fellow members of the 62 group.
There is also a great article called Thouroughly Modern Mode which champions the allure of demure clothing.This definitely appeals to me. I gave up exposing any body parts in public years ago!