Alf Pitcher, my father-in-law was in the Royal Navy during the Second World War. My husband clearly remembers playing with his Dad’s Royal Navy issue sewing kit and now after searching the old sideboard in the living room my brother-in-law John has found it and I have it safely stored for inclusion in my 2018 exhibition.

and in a similar vein this memory from H. Wade.

I have now catalogued hundreds of your memories and have been looking for some common threads. Knitting, crochet and sewing dominate. No surprise really as most of the memories were collected at the Knitting & Stitching Shows.

Of the knitting memories I found this one from Pamela Richardson particularly fascinating.
“While in the Navy, Uncle Sid learnt to knit and throughout their married life they would share the knitting of any garment. Auntie Joyce would knit the front and back and Uncle Sid the sleeves. It worked for them.” This is a beautifully visual memory and I can just see them sitting either side of a fireplace in armchairs; she knitting the body and he knitting the sleeves. 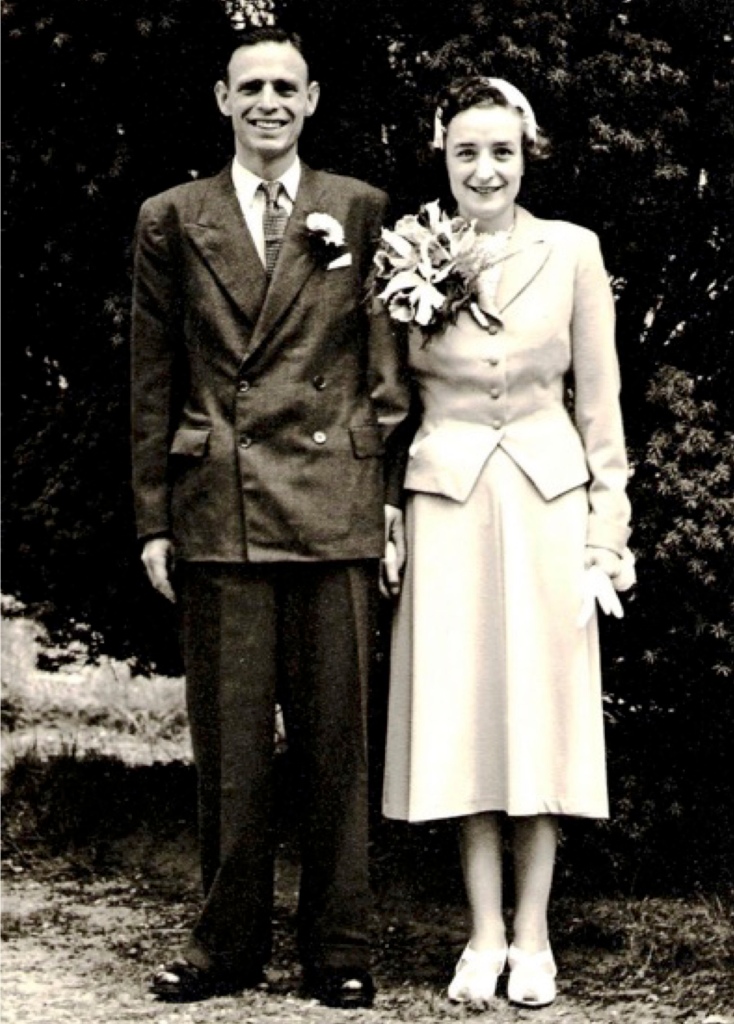 Here’s an interesting a fashion faux pas from Maggie!

…………. and I’ve been experimenting with printed paper, organza and stitch – memory of a paper dress from Susan Enticknap. Experimentation gives me some more thinking time.

Clear thought is essential for me to process what I’m actually going to make.  More soon . 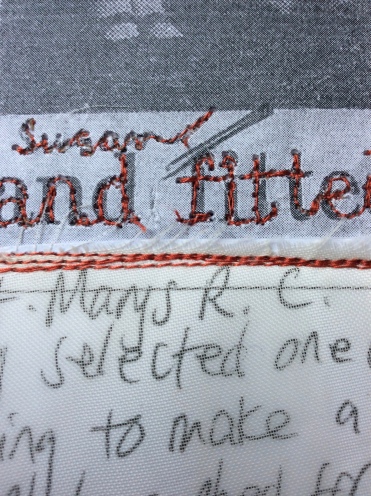 The inspiration for my work can come from anywhere and everywhere and it sometimes takes on a more serious note. I turned on the radio and heard her voice and the words I will never forget “This is not my War”. They were the words spoken by a Syrian mother whose children aged 5,10 and 12 had just been killed by mortar fire in a war she did not understand. The sound of her voice will stay with me forever.

Some Things Never Change commemorates those children and the many others like them that have lost their lives, or have been mentally or physically scarred by war. The lives of those who have survived war and atrocity are changed for all time.
My Dad and his siblings Harry and Madge were children of the First World War, born just before and during so called ‘war to end war’. I have used their images to represent the universal child. The concrete pillar in the background is inspired by the concrete architecture of the skate park on the South Bank of the Thames and the graffiti of street artist Stik and is covered with cross stitches representing the kisses those Syrian children will never receive. 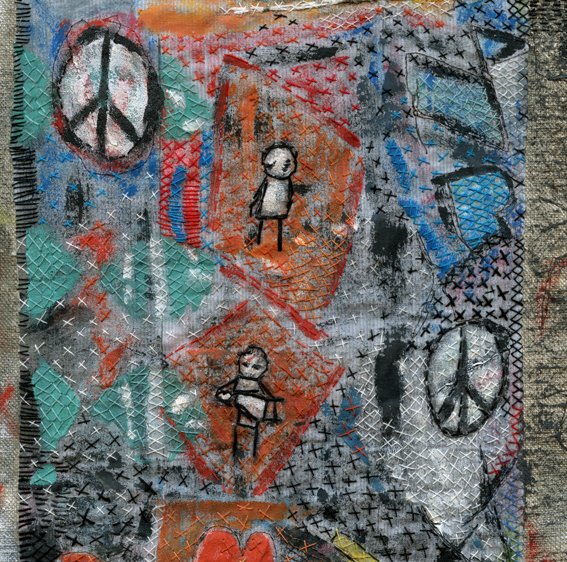 I listen to the Radio and hear his Voice again recalls something I heard on Radio 4. A 10 year old boy was talking to the reporter “You can’t imagine what I’ve seen, what my country has seen”. The Universal Child uses an image of my Dad to represent children affected by war worldwide.

I Listen to the Radio and Hear his Voice.

The Unknown Statistic comes from my research into the First World War during the run up to the centenary in 2014 of the start of the war. A photograph is of some children, unknown to me, but in my husband’s family album was my starting point. I have had this image waiting to be used for many years but it was only when I saw the graffiti in the East End of London I knew how I was going to use it. The children have a poignancy to them. They look as though they are watching someone walking away. I decided to use their images as a way of commemorating all the children left fatherless by the First World War. The exact number of children is unknown as it was not recorded accurately either locally or nationally. I imagined their father was one of the brave Grimsby fishermen whose trawlers went minesweeping the coast with very little protection and little recognition. He walked away and never looked back. It was bad luck for a fisherman to turn around and look back as they walked away to sea. They never saw him again. My own Great Grandfather, Harry Conder died during the first few weeks of World War One when the trawler Fittonia, of which he was skipper, was blown up by a mine in the River Humber. He was survived by a widow and several children. His eldest son Charles Conder died during the last weeks of the war of Spanish Flu, the virus that would be responsible for more than five times as many deaths as the war itself.

Kids from the Family album

In the early morning listening to Radio 4 the news all seems to be bad. My most recent piece is called Some things never change. The need to make this work was triggered by an interview with a mother telling the reporter of the fate of her children aged 12,10 and 5 , killed by mortar fire in a war that was not hers. As a mother myself the interview deeply affected me. I have never been a particularly political person but I feel the need to speak out, in my own way, about the victims of these senseless conflicts. Born in 1913 my Dad was a child of the 1st World war, the so called the war to end war and I have used his image, along that of his siblings, as a mechanism to portray the plight of children still caught up in war in 2012. Thousands of kisses cover a concrete pillar for those who will never receive them. The images are of the work in progress.